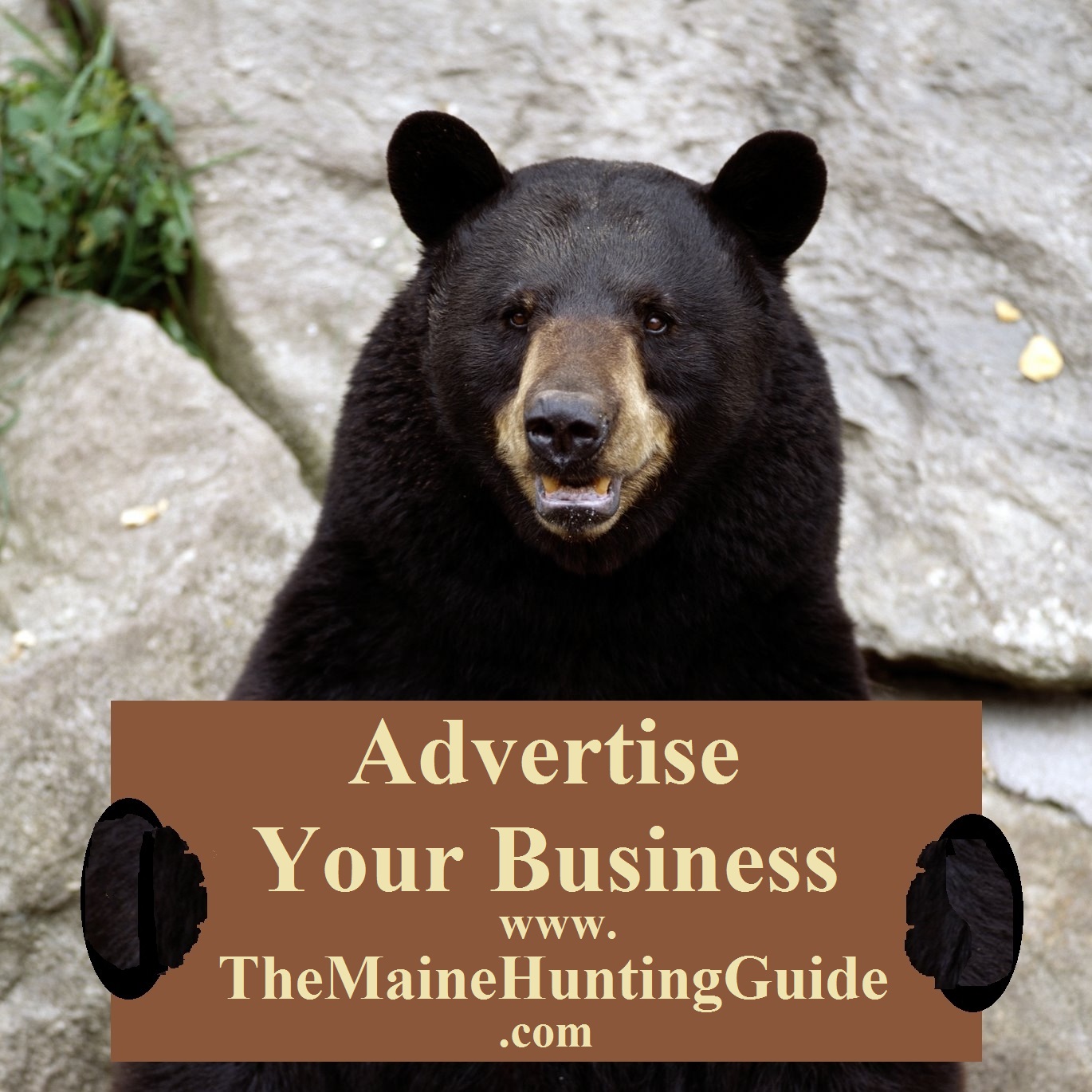 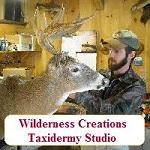 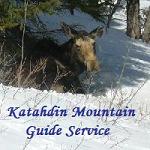 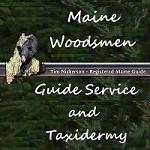 Ed Crosby of Katahdin Mountain Lodge & Guide Service refreshes a bait site, a daily ritual. The storm put the bear off, but they are getting more active. We should have one hanging soon. 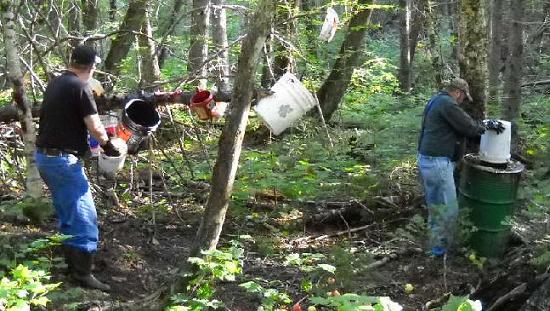 Getting Ready For Bear Hunting

Tim Nickerson of Maine Woodsmen Guide Service and Taxidermy tends an active site in preparation of the start of bear hunting. 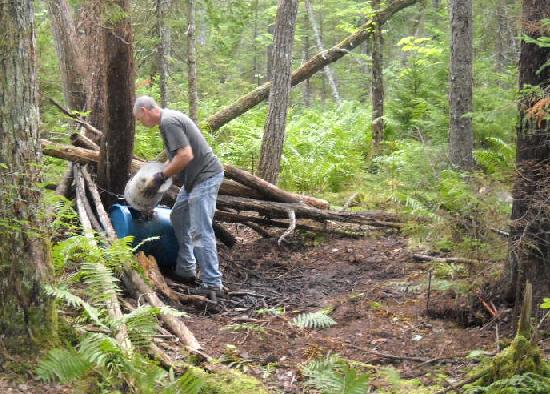 
Went out coyote hunting May 7th 2011, and had this black bear visit. I've been filming bears in this area for three years, he may be one of the cubs from three years ago.

Well, not a successful bear season for my son and I. I saw four bear, three preseason while scouting, the other I mentioned below. I hooked up with a guide, Katahdin Mountain Guide Service, late in the season. Next year my son and I will be going to them for the openner. My son got a moose last year at eleven, his first deer this year, next year is definatly the year for his bear.

Twice as many bear are taken each year by nonresidents and that is a direct result of the fact that a high percentage of them employ the services of guides. So if I want to get serious about a bear for him, I'll do what works.

Labor day bear hunting. Cooler, much more comfortable. At seven in the evening I had a nice bear cross the powerline. He was about 200 yards out, little to far for a shot (for me anyway). Couldn't call him in any closer and he didn't stop to feed on the elderberries either. The berries are going by, they're down to about a quarter. I'll set up nearer to where he crossed today, hopefully get a crack at him.

Bear hunting opener, no luck. What a hot day for hunting, but we stuck it out. Got there before noon and set up our tree stands then went and did a little scouting. We walked further down the powerline and did some checking, found fresh sign and probably should have gone back there, but we stuck with the original plan. It was to hot to do much scouting so we jumped in the truck and did some "AC" hunting. They have gradded the Stud Mill Rd so the going wasn't as rough as the weekend before. Not many other hunters out and about but we did see a few trucks and three loads of logs on our two hour cruise. Then went back to the stands. I tried a scent stick, "12 miles of dead fish", but I didn't find it all that stinky. I wouldn't recommend using it in camp to "set the mood" and your dog would probably like to roll on it, but the wind wasn't right for using it. The wind was from our left to the right from in front us, so that was to our advantage. I even tried a little calling. Your suppose to call for an hour, to keep the bears attention if they're comming. Fifteen minutes was as long as I could keep it up with the mouth call. Then I used the electronic call, but it's not as loud, so I didn't call for the whole hour. We stuck it out for the three and a half hours, a long time to sit especially for a twelve year old. Well at least a long time to sit without a game controller in his hands. End of the day we packed it up with no bear and started our 100 mile ride back to camp. I don't care what the conditions are for hunting, I enjoy every minute. But to help eleviate the boredom twelve year olds experience and make it as enjoyable, I think I'm going to invent a tree stand with a game console.

The 2010 Maine black bear season opened monday, August 30th, this year was a warm day for the opener. Last years harvest got back to "normal levels" after four years of the harvest being below 3000. And it's expected this years hunt will be in keeping with 2009. Last season saw 1278 bear taken by residents with guides assisting 23% of those hunts. While nonresidents took 2208 bear, being guided 91% of their hunts. The current population is estimated at 23,000 and that is said to be a conservative estimate. State models indicate a 15% harvest rate is sustainable for the population. With the state collecting new information on bear populations, they expect to update their numbers. Also saying they may have to "modify" hunting seasons if necessary. Is this a hint to the possiblity of a spring hunt? We can only hope.

I've been pretty lucky seeing bear, hopfully they'll be around the 30th. I'm going to try to get my twelve year old son on this guy.

Went looking for a bear and found one (same area as below). I was checking the elder berries, which are about a third ripened and abundant, but I wasn't seeing any bear signs. I was working the powerline like I would if I was hunting, with the wind in my face, and crested a hill onto a flat grassy area. The grass was kinda tall so I stepped up onto a large rock at the woodline and this bear was right out in front of me about 40 yards. He didn't see me until he got about 15 yards from me.

Went for a ride down the Stud Mill Rd (WMD 19) this afternoon to my favorite bear hunting area. Got lucky and had a nice one come out for some pictures. I was using a Sony Handycam with a 60x optical zoom. I had a monopod to steady the shot but a tripod would have been a better choice at this distance. I'll work on that.
Dusty

My second Maine Black Bear, this one taken in WMD 19. While scouting for Stephen's moose hunt, I was seeing lots of bear sign. So I started hanging around in the evenings (preseason) to see what I could see. Two Videos of the bears on Aug 22,09. This bear was the 10th bear I had seen, most were preseason. 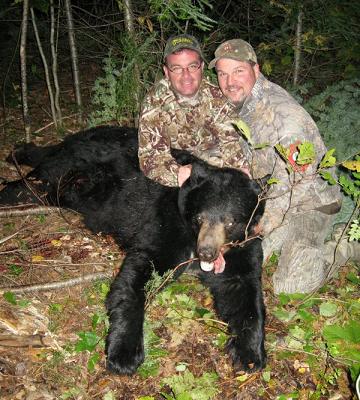